STB Must Reject Absurd Proposal to Prop Up Monopolies

In an environment of record stock prices, mega-mergers and dramatic cost-cutting efforts, the railroads are trying to convince the Surface Transportation Board their balance sheets are too fragile and the Board should change how the financial health of the rail industry is measured. In reality, they’re seeking to lock-in profits while continuing to lock out competition.

Each year, as directed by Congress, the Surface Transportation Board (STB) determines whether or not each Class I railroad is “revenue adequate,” meaning that it is able to cover its costs, attract investment, and earn sufficient returns to provide a sound transportation system.  These determinations are important because Congress also directs the Board to make a “continuing effort” to assist railroads in attaining adequate revenue levels.

Today, the railroad industry is thriving, and the STB has found a majority of Class I railroads to be revenue adequate. While this is undoubtedly good news, some railroads fear that it may threaten the protective regulatory policies the Board adopted decades ago when the industry was financially struggling. And so, three major railroads (Union Pacific, Norfolk Southern, and Canadian National) are now calling for STB to redefine revenue adequacy in a way that practically ensures no railroad can meet the threshold.

The railroads’ proposal is based on a false assertion that the Board understates the railroads’ financial needs when in reality, the Board’s current approach provides more than ample protection. In comments filed recently with the STB, a group representing some of the largest rail customers is calling on the Board to reject this unwarranted proposal and focus on long-overdue reforms that would better address challenges of the modern rail environment.

The Railroads Propose an Absurdly High Bar for Revenue Adequacy

A railroad meeting the Board’s current revenue adequacy standard is able to cover all its costs, attract capital, maintain current assets, invest in new infrastructure, and generate competitive returns for investors. This is exactly what Congress intended in when it adopted the requirement in 1976[1].

The railroads have proposed a radical departure, claiming that no railroad should be considered revenue adequate unless it is more profitable than the median of the S&P 500[2]. But tying revenue determinations to the S&P 500 — a collection of top-performing firms such as Apple and Amazon – would transform revenue adequacy into a standard of superstar financial health. By definition, half of the nation’s most successful firms would fail to clear this bar. That is like telling a high school student that she is not in “adequate” physical health unless that student can outrun half the varsity cross-country team.

If adopted, the proposal would classify all Class I railroads as woefully revenue inadequate despite real-world financial data showing that these same companies are more than capable of attracting investment and earning strong returns. 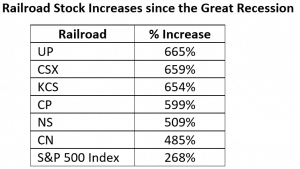 While stock prices do not tell the full picture of a railroad’s financial health, outpacing the S&P 500 index over the long term cannot be ignored. At the very least, it validates the Board’s conclusion that the industry is earning sufficient returns.

Other measures show the railroads’ financially strength. For example, Union Pacific’s most recent annual report highlights that the company “returned $6.3 billion to our shareholders in 2020,” and invested $2.84 billion in its business. Similarly Norfolk Southern reported that it “funded $1.5 billion in capital improvement projects,” “approved dividend distributions of $960 million,” and “repurchased more than $1.4 billion of the company’s shares.” CN’s most recent annual report highlights that the company “annually invest[s] approximately 20% of [its] revenues” in its business, and increased its quarterly dividend per share by 7% and paid $1.6 billion [CDN] in dividends in 2020. Clearly, these railroads are confident in their ability to attract capital.

In addition, multiple Class I railroads are actively seeking to acquire other railroads. In particular, the Canadian National and the Canadian Pacific have put tens of billions of dollars on the table for dueling bids to acquire the Kansas City Southern. Railroads themselves seem to have no reservations about whether investments in their industry will produce adequate returns.

STB’s mission is to promote a safe and efficient rail transportation system, not to favor railroad profitability at over all other considerations.

Congress directed the STB to promote competition to the maximum extent possible and to maintain reasonable rates where there is an absence of effective competition.  The Board’s rate review guidelines state, “Captive shippers should not continue to be charged differentially higher rates beyond what is needed for a financially sound railroad.”  However, many rail shippers have no competitive transportation options and no meaningful process to challenge unreasonable rates.

With the railroad industry thriving, the STB should prioritize reforms to address these growing challenges.  First, the Board should adopt Final Offer Rate Review, a streamlined process to challenge unreasonable rates. Second, the Board should finalize new rules for Reciprocal Switching, which would promote competition by allowing a shipper served by a single railroad to switch its traffic to a second railroad at a nearby interchange.

The Board should focus on completing these long-overdue reforms, which have already been subject to extensive analysis and stakeholder input, instead of raising the revenue adequacy bar to absurd levels and protecting railroads’ ability to charge monopoly rates.

[1] Congress established the revenue-adequacy standard in the Railroad Revitalization and Regulatory Reform Act of 1976 (Public Law 94-210).

[2] The proposal would remove railroads, financial institutions, and real estate firms from the comparison group.